There is nothing worse than when you are outside enjoying the sunshine with family and friends to have that ruined by a hornet/wasp wanting to join in the party! You will find below some tips to help you avoid these unwanted visitors, but more importantly a specific species of hornet, Asian hornets, which could potentially cause some issues.

What to look out for-

Asian hornets are considered an invasive species in the UK. As we enter August, Asian hornets are at their peak for activity. With the warm months preceding and more to follow, it is important to keep an eye out!

Asian hornets were first sighted in the UK in 2016. Although these sightings may be few and far between, these hornets pose a huge threat to our native honey bees and pollinators.

But do not fear, they are no more of a threat to humans than our native hornets/bees/wasps. However due to being highly effective predators they have the potential to cause great losses to bee colonies should they increase their population.

They are most threatening in the summer, as this is when new queens have emerged and have begun to create a nest. This is prime time for our native pollinators to be under attack as they are preyed upon when attempting to enter their own hives.In the Autumn months, Asian hornets focus mostly on nest expansion and the production of new queens.

-They have yellow legs as opposed to black

-They have an orange face 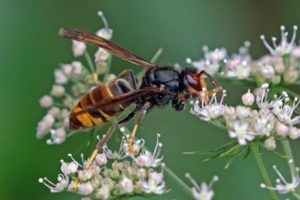 What action can you take to avoid them?

Like other stinging insects, they are attracted to food and drink so it is good practice to clean up any spillages in the kitchen and remove any food off counter tops. Ensure rubbish bin lids are secure and away from doorways and windows. In the early summer months they are particularly attracted to ‘sweetness’, so perfume and aftershaves can attract them too.

If you happen to come across a nest, please do not try and remove this yourself. Please phone us for professional advice and services.

We use cookies on our website to give you the most relevant experience by remembering your preferences and repeat visits. By clicking “Accept All”, you consent to the use of ALL the cookies. However, you may visit "Cookie Settings" to provide a controlled consent.
Accept AllCookie Settings
Manage consent

This website uses cookies to improve your experience while you navigate through the website. Out of these, the cookies that are categorized as necessary are stored on your browser as they are essential for the working of basic functionalities of the website. We also use third-party cookies that help us analyze and understand how you use this website. These cookies will be stored in your browser only with your consent. You also have the option to opt-out of these cookies. But opting out of some of these cookies may affect your browsing experience.
Necessary Always Enabled
Necessary cookies are absolutely essential for the website to function properly. These cookies ensure basic functionalities and security features of the website, anonymously.
Functional
Functional cookies help to perform certain functionalities like sharing the content of the website on social media platforms, collect feedbacks, and other third-party features.
Performance
Performance cookies are used to understand and analyze the key performance indexes of the website which helps in delivering a better user experience for the visitors.
Analytics
Analytical cookies are used to understand how visitors interact with the website. These cookies help provide information on metrics the number of visitors, bounce rate, traffic source, etc.
Advertisement
Advertisement cookies are used to provide visitors with relevant ads and marketing campaigns. These cookies track visitors across websites and collect information to provide customized ads.
Others
Other uncategorized cookies are those that are being analyzed and have not been classified into a category as yet.
SAVE & ACCEPT
Powered by